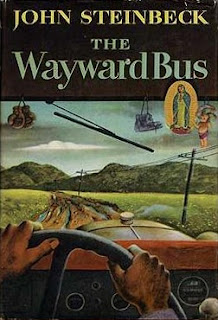 I read John Steinbeck's 1947 novel The Wayward Bus several months ago and absolutely loved it. But even though loving it I have found it difficult to write a review that does justice to such a remarkable novel. Now John Steinbeck should really need no introductions should he? After all he is quite possibly the greatest American writer of the 20th Century. Over a career that spanned 50 years he wrote three of America's most seminal novels which raked in a 1962 Nobel Prize for Literature in the process.
Of course those three novels are the 1939 Pulitzer winning The Grapes of Wrath, 1952's East of Eden, and the 1937 novella Of Mice and Men. All three have been adapted to film with East of Eden starring James Dean. Unfortunately I haven't read anything else by Steinbeck so it is hard to gauge how good, or how well, this 350 page novel stacks up against his acknowledged masterworks. I believe it is considered one of his weaker works even though it was at the time financially more successful than any of his previous novels.
Well for me it is pointless trying to gauge this against his other novels since I haven't read any of them. So I can only critique it as a stand alone novel. Well the first thing I can say is this. If this is considered a weaker Steinbeck novel I can't wait to read his better ones! Seriously this is a superb novel and I just haven't been able to stop thinking about it since I read it. What makes it so memorable? For me it is the characterisations and how incredibly vivid they are. Steinbeck wrote all the characters so believable that any reader can recognise at least some of them from their own lives. It is a short novel that takes place over the space of one day and involves a disparate group of people on a short bus trip between bus stops.
But it isn't the trip that is the focus, it is the people themselves, their individuals lives and characters. There are nine protagonists of whom none dominates the narrative. The viewpoint shifts between them all and changes from external dialogue to internal monologue as the reader experiences each individuals thoughts. This is the novel's core as it establishes and delineates each character. The obscure bus stop and the bus trip are just a back drop and setting to the people. Not a lot actually happens in the novel as it is characterisations that its heart and how each is so different from the other which mirrors real life.

What I like is just how vivid a picture of each character Steinbeck paints. He is such a great writer that as I read the novel I became so engrossed in it that everything else around me ceased to exist. It transported me into its 1947 setting and I quite literally felt as if I was there with these people. But Steinbeck goes a bit further because with his personal monologues the reader gets into each characters mind and how each views themselves, their situations, lives, and those around them. It is just as we ourselves do which is why I found this such a remarkable work. It is about humans and how individualistic we are all the whilst inter-acting with other humans around us.

I won't take up your time in describing each character individually. But of the nine one was a particular stand out for me. Before that though I'll highlight what makes Steinbeck such a remarkable writer. In one scene the wife of the bus driver stays behind whilst her husband and passengers trundle off in the dilapidated old bus to the next stop. She does so with the express purpose of getting sozzled. And sozzled she does!! The remarkable thing is that Steinbeck's writing skills are so keen that the reader themselves feel as if it is themselves getting wasted and not a character in a novel. It is an incredible piece of writing and I marveled at how I quite literally felt myself getting more and more light headed just as the woman was! Suffice to say though she gets so inebriated that she falls over and passes out....and passes out of the novel completely. It was such a vivid scene that I pictured in my minds eye as if I actually there witnessing it. Just a superb piece of writing.

The other characters are the woman's husband who is also co owner of the cafe and the bus driver, their hired help young guy with a dreadful case of acne, a waitress who quits after her mail is read by the cafe owner, a traveling salesman who has the Medal of Honour, a family of three traveling to Mexico for a holiday, and a local going back home. But the last is the most interesting character of them all. She is a young, curvy, stunning blonde woman who is the only character who remains un-named. Of them all she was also the most realised hence the most interesting ( to my mind at least ).

What makes her so interesting is that her incredible looks are an actual curse. Other females feel threatened by her because she is so stunning and males just want to screw her. Steinbeck writes from inside her mind as she details her curse and how she has tried to combat it. Everything from wearing severe clothes to drab, to letting herself be ' kept ' be several rich men to keep other males away, to living alone or with another females. But what is so wonderful is her absolute ability to read men! She just knows which ones are going to instantly proposition her and the ones who try to be ' friends'  in the hope of scoring later. In one scene she knows what is about to be said by one guy as inside her mind she says ' Here it comes. ' And sure enough the guy starts hitting on her!

I like this character because through her Steinbeck shows how humanity can be so judgmental to other people. This young woman is so outcast because of her looks she has trouble finding work with other females. As to men, well all they try to do is fuck her. So she is pushed into the world of stripping to make a living. It is a shame because as she says to herself she is an intelligent well read person, but all the world can see is what is on the outside and don't bother looking past it. She has become adept at keeping people and herself at arms length from them by spinning stories about herself, which again is a shame as the real person is resorting to deceptions. This character is the reason I haven't been able to stop thinking about The Wayward Bus since I read it in early August.  For some reason her vividness and individual plight struck a chord because it is so true. It speaks not only for a stunning looking female but of anyone who looks or may be perceived as  'different ' and how people react and treat them.

I have not had a day go by that I haven't thought of this novel. It is incredible to think that is is considered a ' weak ' novel because it is just so vividly realised. It may be a novel but John Steinbeck brings each character to life in a way no other author I have read has ever done. Each one is similar in one way or another to someone we know. Seriously read this novel! It isn't a difficult read but still a genuine piece of literature that both satisfies with its prose and its subject matter. All I can say in conclusion is this. If this is a weaker Steinbeck novel then I can't wait until I read his greater works...The Grapes of Wrath here I come!!

BRENT
I'm a 41 year old Kiwi, single, with two degrees in military and general history. Done the hard way extramurally!! I love going to the movies and do so at every opportunity I get. I read voraciously, especially on military and American history, but also the 'classics' like War and Peace, Gone with the Wind, The Count of Monte Cristo etc. So stayed tuned! Hopefully I've got something of interest to say!!

Books I have read recently but not reviewed.

Other Literature Sites and Blogs.

Visit my site on the movies I watch